People tell me I should go to a CFAR workshop and they may well be right, so it’s time to figure out how to prevent what is inevitably going to happen there from happening.

each of the workshop’s sessions invariably finished with participants chanting, ‘‘3-2-1 Victory!’’ — a ritual I assumed would quickly turn halfhearted. Instead, as the weekend progressed, it was performed with increasing enthusiasm. By the time CoZE rolled around, late on the second day, the group was nearly vibrating. When Smith gave the cue, everyone cheered wildly, some ecstatically thrusting both fists in the air. (source)

Group enthusiasm is not for me. I’ve been to the LessWrong Community Weekend, and I’ve been to EA Global, and each time, everyone was excited and there was always the stupid cheer at the end. I do like that this is a thing – enthusiasm is good! Group cheers increase the feeling of togetherness and community. I don’t want to suggest dropping this custom. Yet, every time I’m part of this custom, I cringe and I can’t cheer or shout or wave my fists around and, instead, I start feeling anxious, sad, and not part of the group. And if I’m not really careful, I always end up in a sadness/depression spiral. I want to change that. 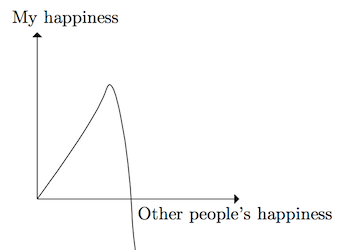 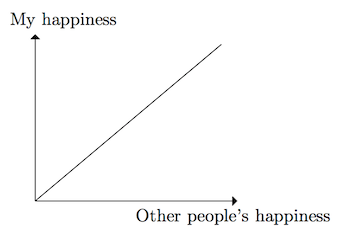 The interpretation of this that currently feels most right to me has two parts. One, being loud, excited, enthusiastic, isn’t me, therefore, trying to pretend that I am these things feels inauthentic and wrong. Two, not being able to participate in group behavior when (a) it is expected, and (b) I want to, makes me feel excluded. So the feeling is, group cheers is not something Nino does; group cheers are something members of this group do; therefore, I do not belong to this group.

I remember different situations where I deliberately played a specific role in order to nudge my identity in a certain direction. For example, before I started my TA job, I was Not A Person Whose Job Involves Leading A Group Of People. Deciding to change that was uncomfortable and anxiety-inducing. A person who could do a job like that was not who I was, but it was who I wanted to be. So I forced myself into the role and, knowing that I would be easier not to do this alone, I had someone sit beside me as I sent out the email asking for the job. Once I’d done that, I’d become a person who can, at least, ask for such a job. Once I’d experienced doing a thing a person like that would do, actually showing up to sign the contract and then going to the classes was much easier because I could just let subconscious consistency effects play out. “Well, I did ask for this job. If I’m the kind of person who asks for a job like this, that must be because I think I can do it, and that must be because I probably actually can do this.”

I didn’t used to be the kind of person who enjoys dancing badly at parties. I’m still not 100% comfortable doing it, but ever since I put myself in a situation where I was forced to participate and was in a good mindset to accept that I was actually doing it instead of “I’m forcing myself to do something that is not Something I Do,” dancing has become much easier for me – so much that it can even be enjoyable.

So: I alieve that I’m not a person who can shout, or cheer, or be loud and excited about things. Therefore, getting into situations where this behavior is expected of me, will make me anxious. Knowing that, the solution seems relatively simple. I need to practice shouting, and cheering, and being loud and excited about things. I need to do this as long as it takes to become less painful and aversive. For this to be successful, I need to be in an environment that feels safe to me. My best guess for what that environment would look like is: a group of 2, 3, at most 4 people, including me, in a place where no strangers can easily hear loud noises. Being inside a regular apartment with neighbors above and below would make this considerably harder. Doing this on my own won’t work because I can’t make all the noise myself. Turning on loud music or sounds from the internet won’t work because the sounds need to be human made. As I mentioned, concerts won’t work because I don’t feel safe enough around the other audience members. Open spaces, outside, far away from any buildings would work well because you could start out by standing far apart and shouting things at the other person. Since, in that case, shouting would be necessary to transfer information, it wouldn’t feel as aversive. From there, you could slowly move closer together while keeping the volume high.

Once I’m more comfortable with shouting, we could move on to loudly displaying enthusiasm by saying, “Yay!” and “Woo!” and “Yes!” and “Victory!” really loudly, and waving your fists around and whatever people do.

I predict that, if I do this a few times, group enthusiasm will be significantly more bearable for me in the future, which would make lots of social interactions easier; and that would be extremely useful for my life in general.

I also predict that I’ll feel really really silly doing all of this. (Even more silly than I felt writing it.)

(Comment or email me if you want to be my shouting partner. This could be lots of fun.)